In this world you will have trouble… 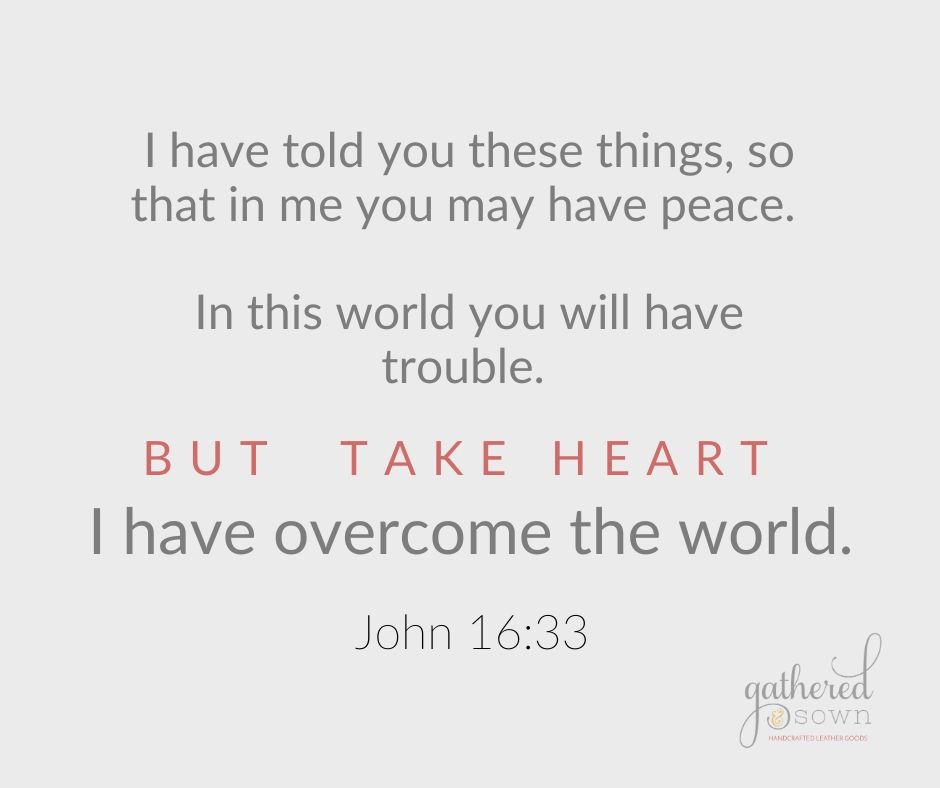 When my girls were younger, I realized quickly how crippling anxiety can become. When they got sick, I learned how little control I had. And for me, anxiety is all about control.

Soon it turned into such an issue, that even simple and fun tasks like walking into Target became full-fledged panic attacks. Not knowing how long I’d be in the store or when I’d get back home would send me into a silent and private spiral. Even the people who were with me had no idea what was going on inside of my head and body.

Travel is even still difficult for me. Car rides of even just one hour remind me that for that time between when I leave my house and get to my destination, I have no control. And even once I get there, what if I suddenly get sick? How will I get back to the comfort of my home?

This is my brain. I’m fairly certain it’s all a result of trauma, but regardless, it is incredibly difficult to tell your brain how stupid it is. I know it’s stupid, I know every scenario is highly unlikely. But my body still reacts in a physical way to subconscious anxiety.

I’ve spent my entire adult life quietly fighting this mental battle, and it continues to this day.

So what I’m about to tell you makes no sense at all. Hear me out…..

What we are living through is something that most of us, if not all of us, have never experienced in a lifetime. If there is anything that describes this time, it is a complete and total lack of control. Watching the world shut down at the mercy of an invisible virus is the epitome of a panic inducing situation. I know people who are afraid to breathe the air that their own family members are breathing, and the scary part is, it’s justified.

For just a second, I want to direct you to John 16. If you have a Bible, pull it out. If you don’t, click on this link to read it. Can you read that for a second? It’s a short chapter

As I was reading Jesus’ words to His followers, something struck me about this whole situation. Jesus knew what laid ahead. He knew His own fate. He also knew the fate of his closest friends, who he was talking to in this chapter. He knew he’d suffer a horrific and painful death in a short time. He also knew that once He was gone, his friends were each going to suffer and be killed in his name.

He was not speaking to a group of Moms having coffee at church while their kids were cared for.

He wasn’t speaking empty words of hope to people who didn’t understand persecution.

Yet He was telling them that they had no reason to fear.

Because He has already overcome this world. And to prove His provision of care, He told them about the Spirit who He was sending after he left.

3 ways to calm anxiety in these troubling days

These are troubling times, friend. There is no denying that. But as believers, we have reassurance that nothing is outside of our Fathers ability to provide. That while things are dark and scary here, we know with full assurance that here is not our promised gift. Eternal life fully in His presence is what we look forward to. But in the meantime, we need to remind ourselves of practical ways that we can live now to keep our minds focused on eternity, rather than living in fear and desperation.

Remember that while we shouldn’t live in fear or panic, we need to be responsible. Follow the guidelines put in front of us by people who know more than we do to help the greater good. Even if it inconveniences you a little bit.

Don’t let your mind settle in hopelessness. Open social media or turn on the news and you will have no shortage of dire predictions and hopeless scenerios. Close your laptop, turn off your phone and pick up your Bible. God gave us this time  to  to slow down and remember who He is. Soak your mind in His promises and live in here and now. You can’t control tomorrow, you can’t change yesterday. But you can be thankful for the things and comfort you do have now.

Live for eternity. Yesterday my daughter told me that people were talking about how these are the last days. I could tell she was a little scared. So last night, I took a minute to ask each of my girls if hearing the term “last days” scares them and why. I wanted to hear their fears and understand whether or not they knew who Jesus Christ is and what He did for them. Friend, this is SUPER IMPORTANT.

We don’t know when it will be anyone’s “last days”. We don’t know when Jesus Christ will come back. But we do know that someday will be everyone’s last day. So it’s literally life and death that we talk to people about Jesus and share what He did for them. We are each called to be disciples and it is our job to share God’s truth with those He placed around us. Use this time to talk, listen to those you love and answer questions as they come up. 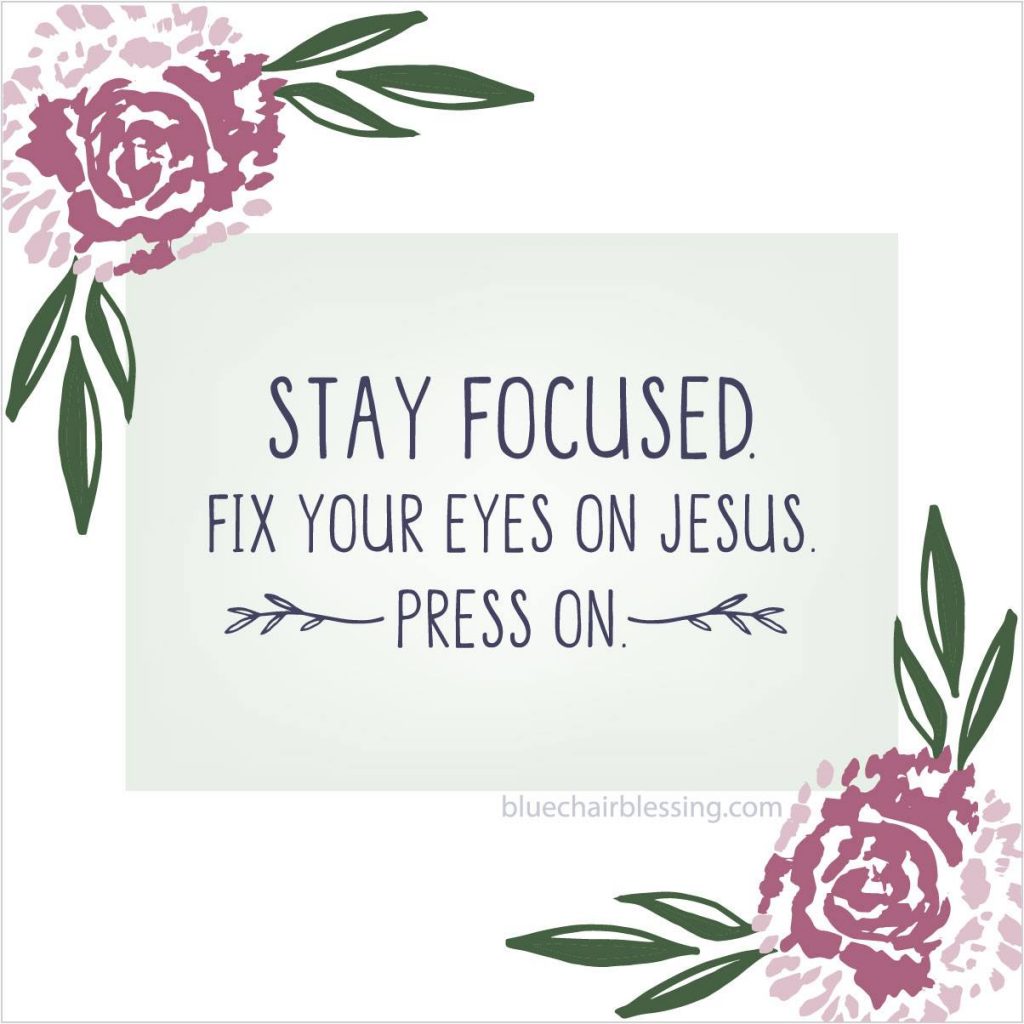 Take Control of your heart

Anxiety still kicks my butt most days. But when something big like this happens, I know where my assurance lies. I know who holds my future. I also recognize that sometimes the best thing we can do is leave our worry and desire-to-control parked while we let those who know better about what we are supposed to do do the driving.

Fill your heart with truth, surround yourself with people you love and pour God’s light over them. Use this time wisely and understand this world is not our home. The enemy may think he’s winning this one, but we know that is not the truth! People will be drawn closer to God through this, families will be strengthened and people are coming together.

Here are some Bible verses that I think will give you hope and encouragement. Read them, write them. Hang them where you can be reminded of them. And share them with someone else who needs the reminder. We’ll get through this ♥️

For I am sure that neither death nor life, nor angels nor rulers, nor things present nor things to come, nor powers,  nor height nor depth, nor anything else in all creation, will be able to separate us from the love of God in Christ Jesus our Lord.

For I consider that the sufferings of this present time are not worth comparing with the glory that is to be revealed to us.

And the God of all grace, who called you to his eternal glory in Christ, after you have suffered a little while, will himself restore you and make you strong, firm and steadfast. 1 Peter 5:10

May the God of hope fill you with all joy and peace as you trust in him, so that you may overflow with hope by the power of the Holy Spirit. Romans 15:13

Brothers and sisters, I do not consider myself yet to have taken hold of it. But one thing I do: Forgetting what is behind and straining toward what is ahead,  I press on toward the goal to win the prize for which God has called me heavenward in Christ Jesus. Philippians 3:13-14

Many are saying of me, “God will not deliver him.”

But you, LORD, are a shield around me, my glory, the One who lifts my head high.

I call out to the LORD, and he answers me from his holy mountain.

I lie down and sleep; I wake again, because the LORD sustains me.

I will not fear though tens of thousands assail me on every side. Psalm 3:2-6

Since, then, you have been raised with Christ, set your hearts on things above, where Christ is, seated at the right hand of God.

Set your minds on things above, not on earthly things. Colossians 3:1-2

For our light and momentary troubles are achieving for us an eternal glory that far outweighs them all.